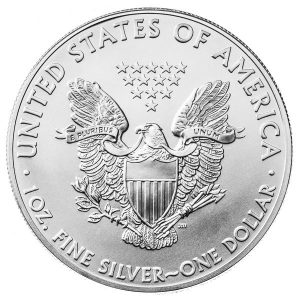 In 1986, the U.S. Mint began selling gold and silver bullion coins under the American Eagle Coin Program. Now platinum and palladium coins are also part of the program. The United States Mint produces collector-friendly variants of the American Eagle coin in proof and uncirculated conditions. In 1907, a new design for the $20, or “double eagle,” coin was introduced, and it was this design that was chosen for the obverse of American Eagle Gold Coins. Famed sculptor Augustus Saint-Gaudens was responsible for the design, which depicts Liberty with her back to the viewer with a torch in one hand and an olive branch in the other. A new eagle design will appear on the reverse of U.S. coins beginning in 2021.

The “Walking Liberty” design by Adolph A. Weinman, first seen on the half dollar in 1916, is featured on the obverse of American Eagle Silver Coins. While the American flag billows behind her, Lady Liberty walks in profile. She is holding oak and laurel branches in her left hand while extending her right. Since 2021, the coins’ reverse has shown an eagle landing while holding an oak branch.

The first American Eagle Platinum Coins were issued by the Mint in 1997. The front of this bullion coin depicts Liberty while the reverse shows an eagle in flight. Every year a new design is presented for the proof coin. Both bullion and proof versions of the American Eagle Palladium Coin debuted in 2017. These palladium coins, like their silver counterparts, are reproductions of classic Adolph Weinman designs. The 1916 Mercury Dime is easily recognizable by Liberty wearing a wing-adorned hat on the obverse. An eagle clutching a branch is a design element originally seen on the American Institute of Architects Gold Medal in 1907.

A minor investment in gold, silver, platinum, or palladium may be made in the form of American Eagle Bullion Coins, which are both easy to store and affordable. Gold bullion coins come in four different sizes: one ounce, half an ounce, a quarter ounce, and a tenth of an ounce. All three bullion metals have one-ounce options: silver, platinum, and palladium.

For coin enthusiasts, the Mint offers American Eagle coins in proof and uncirculated quality. Silver and gold coins are issued annually, with proof and uncirculated versions available. Only proof versions of platinum coins are struck at the moment, while the coins struck in palladium alternate between different finishes every year. The coins are available only through the United States Mint, and their price will never change.

In 1997, the US mint issued the first platinum-proof coin as legal money. It has the greatest denomination of any United States legal tender currency, at $100. It was struck at the West Point Mint and has the mint mark “W,” indicating that it was made specifically for collectors. You may buy this limited-edition precious metal coin from the Mint. Between the years 1997 and 2017, the obverse of every American Eagle Platinum Proof Coin had the same image of Lady Liberty. The back of the coin had different designs from different series. The coin’s original 1997 design was used in 2017 to commemorate the 20th anniversary of the platinum-proof program. The Preamble to the Declaration of Independence Series was released by the Mint from 2018 to 2020. In each year’s design, Liberty appeared in a new setting.

Each coin in the “First Amendment to the United States Constitution Platinum Proof Coin Series,” issued from 2021 to 2025, is made of 99.95 percent pure platinum and includes a brand-new design. The reverse designs depict the progression of an oak tree from a tiny acorn to a towering tree, representing America’s development into a free and prosperous nation. Our Bill of Rights is the germ from which liberty blossoms into something strong and beautiful. All the rights guaranteed by the First Amendment are essential to the progress of the country. The reverse design first seen in the 2018-2020 Preamble to the Declaration of Independence Series will be carried over here. An eagle clutching an olive branch soars over the design.