Is Your Money Safe in the Bank?

From investors to savers alike, across most nations of the world, the question of where to store our hard earned money to keep it safest has always been front of mind.  Since the Federal Reserve was conceived in the United States during the year 1913 (coincidentally the same year Income Tax was initiated), central banks have been a cornerstone of global finance and because of that for over a century most of the public households have chosen to store their family’s wealth in the bank.  It is safe to say that most of these families have never given a second thought about banks, maybe only going as far as to decipher the pros and cons between two based off account benefits, but most simply think “the masses use them, so why shouldn’t I?”  But do you know exactly how the banks use your money once it is deposited and you turn your back?  Most presume their money is in their bank account because they can spend it at will.  They tap their debit card, and their deposits, right where they left it, are spent, as they need.  I mean, the banking app on their phone also says their account has money in it after all, and this is true to a degree.  Your account has money in it, but sadly, not NEAR as much as you think.  Fractional reserve banking ensures you only ever have a portion of your deposits actually held within your bank account.  When times are good, no one thinks about it and they can rely on digital bank deposits because the money just keeps flowing.  However, during times of economic crisis – the bank no longer becomes the safe haven for their savings most believe it to be due to a reform and protection act passed after the 2008 financial crisis called, Dodd-Frank.

Before getting into what exactly the Dodd-Frank Act means for your bank deposits due to the precedent it sets for national central banks – we must dive deeper into how your money is being used by banks this very second.  To understand that, we must breakdown fractional reserve banking (mentioned earlier) and how banks are using this system to make huge profits off your deposits, while kicking you back a measly interest rate in return.   Fractional Reserve Banking is a system in which banks have been allowed to hold only a small fraction of the money that is deposited with them.  In most cases it is under 3%, which means, for every $100,000 you deposit in the bank, the bank only keeps $3,000 in your account at any given time.  This allows them to lend out the remaining $97,000, effectively creating new money, earning interest on these newly created dollars every step of the way.  While this is an INCREDIBLY good deal for the banks, it systematically robs its depositors and actually poses a serious risk to the economy. If too many people try to withdraw their money all at once during a time of crisis to secure the wealth they have worked hard to earn (known as a “bank run”), the banks will not have enough cash on hand to cover all of the withdrawals – leaving many depositors without the savings they thought they had stored.  This can lead to widespread panic and a sharp increase in the money supply due to reactive stimulus printing, causing inflation and a surge in precious metals prices as sour depositors flee to find true safe haven assets with what money they have remaining.  For these reasons, some economists believe that fractional reserve banking is a dangerous practice that should be abolished immediately – I, for one, agree.

Going deeper, whenever a bank makes a loan (using depositor money), it creates debt.  This debt, in turn, increases the money supply. The more debt that is created, the higher the money supply will be.  However, this process can eventually lead to the collapse of the banking system.  When too much debt is created, it becomes difficult for banks to repay their obligations.  This is where the previously mentioned Dodd-Frank Act comes in.  This happened in 2008, but when the banks failed, the government printed over $600 billion and bailed them out.  With the passing of the Dodd-Frank Act, the government has moved from bailouts to bail-ins, which simply means if your bank fails, they will absorb your deposits and you will become part owner of the dead bank.  Essentially, all depositors are on the hook for any future bank failure.

The creation of Central Bank Digital Currencies (CBDCs) exasperate this issue because at least in the current system (while still far from ideal) 3% would still be able to remove physical cash.  With CBDCs there would be no possibility of existing financially outside the system due to the programmability they possess – there would be no physical money to withdrawal.  Currently, 62 countries around the world have begun working on a national CBDC – Canada is among them. 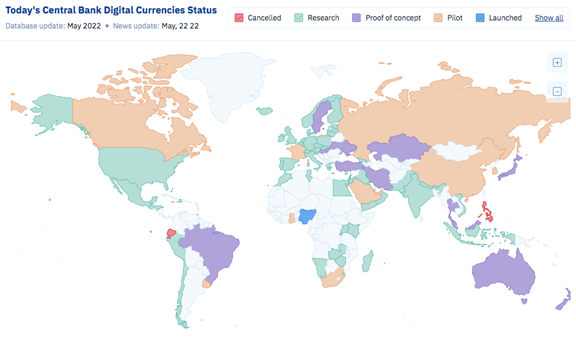 Purchasing silver and gold in physical:

Purchasing silver and gold in physical form provide you security, as well as financial flexibility now and in the future.  They not only are poised for massive gains as economic crisis inches closer, but physical precious metals will always exist outside the system and if you wish to protect you and your family from any upcoming uncertainty caused by the prospect of a digital future – physical metals are the way to go.  For many years, gold and silver contracts have been used by the COMEX to manipulate their investors by allowing the sale of the same paper ounce of silver and gold to multiple people.  As currently stands, there are 111 owners per every 1oz of COMEX gold and 336 owners per every 1oz of COMEX silver.  This gives them the ability to suppress the price of these assets, however, when supply dries up (which is happening at record pace) the COMEX will lose this ability and the true prices of silver and gold will be revealed.  When crisis hits, precious metal prices soar, and when those paper owners ask for delivery of their physical silver and gold, they will quickly realize like those that will fall victim to fractional reserve banking system – their money doesn’t exist in reality.  The old investment adage has never rang more true, “if you don’t hold it, you don’t own it.”