Given the recent price action within the precious metals market – you are seeing some investors begin to question whether silver and gold are the right move for their portfolios during the current economic calamity.  However, the smart money has been using this recent pull back as an opportunity to buy at prices others are being turned off by.  For this action to be fully understood, we must revisit the year 1967 – the last full year Canadian coinage was minted at an 80% silver composition (aside from the nickels which was just that, nickel).  From that point, silver was removed, debasing the coinage, rending it essentially valueless other than what was stamped on its face.  That said, if we take a look at the Canadian economy during 1967, it begins to paint a crystal clear picture as to why every family, in every nation across the world, should hold silver and gold.

Here are the numbers:

If during each hour of work, employees were paid 5 quarters (which at this time held 4.664g of pure silver each), an employee would have $1.86 worth of silver.  This actually benefited the employee because they were given more value in silver than their face value wage implied; protecting the holder against a Canadian dollar devaluation (inflation).

If you fast-forward to today, those same 5 quarters hold a silver value of $15.85, while minimum wage sits at $15.55.  This shows silver HAS kept up with inflation over the years, but as employees we do not get paid in sound money any longer.  If we were given our wage in quarters minted in 2022 or simply paid in cash or digital dollars (those that contain no silver), the melt value of $15.55 in 2022 quarters would be right around $0.03.  For those paid in cash or digital bank transfer, the intrinsic value of the paper cash or digital dollars would be $0.00 due to them being tied to no tangible asset.  Where as pre-1967 employees were paid in assets that stored value (silver), it is far easier to understand and see after breaking down the numbers that those same coins minted now carry no value whatsoever, and so employees now get paid between $0.00 to $0.03 in REAL value.

To finish off the comparative analysis, if we got paid today’s minimum wage with quarters from 1967 and earlier, the melt value of 62 silver quarters today ($15.50 face value) is $196.54.  A staggeringly high number considering if we still used sound money, the common household would not be under such financial strife.  That said, there is a solution to this problem for you and your loved ones, and all it takes is a little understanding about what is happening and why.

Here is some insight investigating those questions:

Suppressed assets, namely precious metals like silver and gold, are a paradox.  On the one hand, their value is artificially low due to the power of outside forces.  Then on the other hand, those who understand why they are suppressed can anticipate a coming economic trend and profit handsomely from it.  Open short contracts by major financial institutions (a main player being Bank of America) need covering and this is where the value of suppressed assets comes into play.  Values must be pushed as low as possible to help them exit these short positions before price takes off – leading to their liquidation/bankruptcy.

The currency, which these suppressed assets are denominated in, is being financially restructured.  This means that new currencies (Central Bank Digital Currencies) are being created to replace the old ones that will die with the system that facilitates them due to the enormous debt that has built up.  When this happens, the value of suppressed assets is sure to skyrocket as their role increases in the quantum system and their revaluation will help cover debts created from the last system being removed.  Those who have positioned themselves ahead of time will reap massive profits.  That said, don’t be discouraged by suppressed asset prices — instead, view them as an opportunity to get ahead of the public due to having the ability to “pack your bags” at such a severe discount to where their true value lies, and because of that, when crisis strikes you will make a killing in the process or at the very minimum be able to weather the storm depending on how much of the suppressed asset you stored.

All in all, if you feel the situation is not as bad as the above makes it seem – check out these numbers below, keeping in mind the USA is the most important economy in the world at present due to the USD being the world reserve currency and all other currencies being tied to its success: 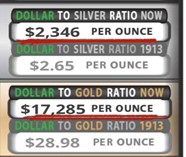 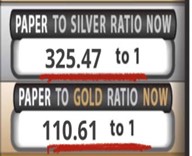 This is where much of the corruption stems from and how institutions can manipulate the physical price of precious metals.  For every 1 ounce of physical silver, the paper market has 325.47 owners!!  For every 1 ounce of physical gold, the paper market has 110.61 owners!!  When a revaluation takes place and each of those owners demands physical delivery of their ounce – it will be impossible.  When that happens, the prices shown on the right (the true price based off USDs in circulation) will become reality, and ONLY those holding the physical metal (not in paper form on the stock market) will be the ones who reap massive rewards.

Current US National Debt leading to a staggering $242,985 per taxpayer burden.

Total US Debt has surpassed $90 trillion, with well over $600 trillion in created currency through credit cards and derivative markets.

This means that if the USA sold every single one of its assets, it would still be $66 trillion in debt.  In other words, the country is broke and only a silver and gold revaluation can pay off the debts.

For the past 100 years those calling for higher gold and silver prices have been ridiculed, but every time the price action proves them sane.  In the 1970s, $200 per ounce gold was mocked, but $800 per ounce gold followed.  The same will happen this time, but on a much larger scale.  Calls for $3000 gold are currently mocked, but the US Debt Clock says close to $20,000 gold is more realistic.  The US economy (and so the current world financial system) needs to change, and it is happening right before our eyes – as usual, silver and gold will lead the way.