After a couple months of excitement in the precious metals industry for investors in the shiny metals known to be ‘sound money’ (due to silver and gold being the best store of value long-term), the mood has recently turned from excitement to angst.  With the mainstream being filled with headlines such as the one out of Kitco last week, “U.S. Mint sees gold demand drop 43% in April, silver demand drops 23%” – those investors without full knowledge of the total scope of the financial market may not grasp entirely what is happening and subsequently may also become spooked out of buying more at lower prices, or even worse, selling their position out of fear prices will go lower long-term. precious metals industry  is very volatile & investment needs research.

Could it really be that bad for the precious metals industry?

The quick answer: no, it is not.

The long answer will take a little more investigation, but I can assure you by the end of our journey you will see that the mainstream media cherry-picking numbers can be very dangerous when interpreted as fact without any personal discernment applied through doing your own research.

Now, let us address Kitco using April’s drop in demand as a type of signal to the market that precious metals are bad for your portfolio.  Within their own article, they immediately state, “In its latest sales numbers, the U.S. Mint said it sold 88,000 ounces of gold in various denominations of its America Eagle Gold bullion coins. Sales are down more than 43% from March.  Meanwhile, annually, compared to lackluster demand in 2021, sales are up 128.5%.”  They immediately retrace and let you know annual sales are up 128.5% from a “LACKLUSTER demand in 2021”.  Look at gold consumption in the USA per year below: 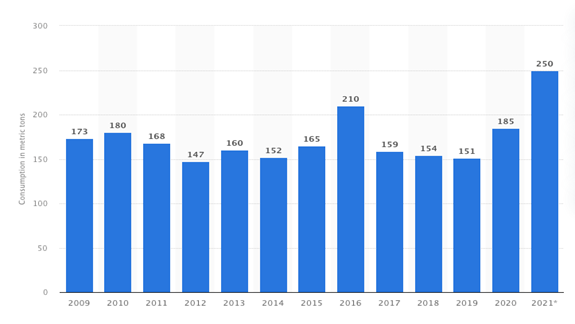 GOLD DEMAND WAS SURGING IN 2021…. Not so lackluster in reality.

And it isn’t only gold.  Silver has seen similar rises in demand around the globe with the global silver market seeing growth in EVERY demand category in 2021, marking the first time all key sectors rose in tandem since 1997.  Leading the way was an all-time high for silver’s use in industrial applications, rising 9% to 508.2 million ounces.  Not only that, last year, the silver market experienced its first deficit since 2015, at 51.8 million ounces, this being the most significant shortage of silver since 2010. 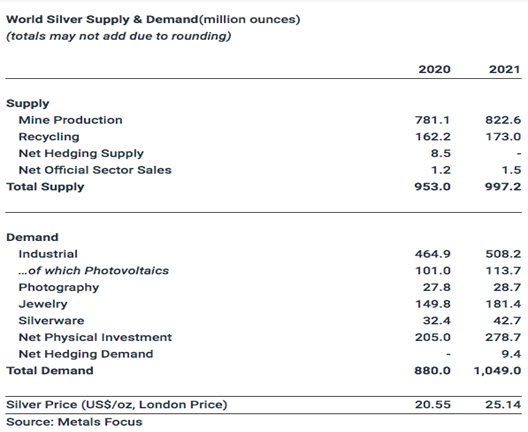 SILVER DEMAND IS SIMILARILY SURGING IN 2021…

In addition, Kitco cites fear of Federal Reserve rate hikes leading to a recession as the main reason we saw demand for precious metals decline due to them preforming better in inflationary environments.  Well, this is just another half-truth because while the FED is being honest when they take 75 basis point (0.75%) rate hikes off the table at future FOMC meetings due to the damage they would cause to the economy, they are not being honest about what damage it would cause.  The truth is, the FED is WAY behind inflation and there is no way to stop the train at this point without raising rates far above what is being discussed; even the 0.75% rate hike they said would not happen.

In March, the Federal Reserve raised rates by 0.25%, and then 0.50% in May.  It was also supposed to have ended its Quantitative Easing (QE) program that same month (March), but for whatever reason, chose to print another $55 billion during that time – leading to more inflation.

To put these moves into context, bonds, particularly, sovereign bonds are NOT like stocks.  A 2% move is a BIG move for bonds – and we are talking about a 5% move in the most important bonds in the world over the span of just four weeks… when the FED is tightening monetary policy.

This means that the FED is now more behind the curve on inflation than it was four weeks ago, and what this is simply telling you is that the bond market (and so the world) is not buying what the FED is selling and doesn’t believe the West has seen the worst of the inflation monster that has been created.  The FED will need to be much more aggressive to do so, and with the current debt situation the United States is facing – they are unlikely to have that ability.

It is difficult to express the severity of what is happening right now in bonds.   So let me provide some longer-term context:

Look at the speed of this rise in yields relative to what bonds have done over the last 20 years.  From 2003 to 2006 the yield on the 2-Year U.S. Treasury rose from 1.00% to 5.00%. This represents a quintupling in yield.  This occurred when the FED was raising rates continuously for three years straight during a major economic expansion period.

That too is a quintupling in yield.  It, however, took place at a time when the economy is faltering, and the FED has barely begun tightening monetary policy.

You can now see why this is a HUGE deal.  The entire financial system will now need to revalue itself based on this different rate of return.  The last time we saw this occur was in 2018 – when stocks did this: 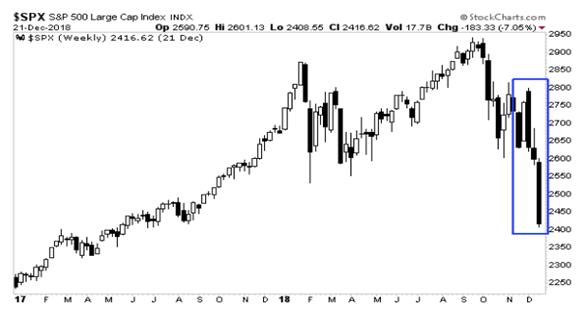 Put simply, another collapse is coming.  It might not be today or tomorrow… but it’s coming.  You can assure yourself – like the central banks of the world loading up on silver and gold – you will benefit from holding precious metals when the revaluation takes place.