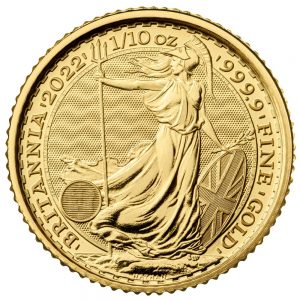 The bullion Britannia coin is highly sought after by both individual investors and institutions since it is trustworthy and recognized all over the globe. The first known appearance of this image was on the coins of Hadrian, which were minted around the year 119 AD. She served as the emblem of a newly founded province and its inhabitants at the time. In 1672, the image of Britannia was brought back into use for the coinage of Charles II, and it has continued to feature on the coins of every king since then. Philip Nathan developed a traditional rendition of the Britannia emblem in 1987, the year that our bullion range was expanded to include Britannia coins. He gave Britannia a strong maritime influence, depicting her as standing above the waves while holding a trident, a shield, and an olive branch in her hands. Britannia became instantly recognizable in the international market as the contemporary face of the British pound and a symbol of national spirit. The recognizable design has been refined over the years and now has four brand-new enhanced security elements, making it the coin with the highest level of visual protection available elsewhere in the world.

Many British investors recognize Britannia primarily as Britain’s flagship bullion coin. The gold Britannia coins were released in 1987 by the Royal Mint in response to the rising demand for bullion coins from collectors and investors. They have a face value of £100 and contain one ounce of 24 karat gold (as of 2013). Besides the 22-carat Sovereign, these are the most popular bullion coins in the United Kingdom.

British legal tender gold coins like the Britannia are free from CGT. Gold is exempt from value-added tax in the UK and the EU. As a result of these factors, investing in gold coins is seen as a relatively risk-free endeavor. The Royal Mint struck half, quarter, and tenth-ounce versions of the 1987 Britannia because of its popularity. Since its introduction in 1997, the Royal Mint’s silver Britannia coin has quickly become the most sought-after silver coin for investment. Our most popular investment item is the 1 oz gold Britannia coin. The gold Britannia coin is widely collected in the United Kingdom not only because of its cheap price but also because it is legal money there. This is great news for investors since it means they won’t have to pay Value Added Tax (VAT) on their profits and won’t have to pay Capital Gains Tax (CGT).

The silver Britannia was the first investment currency made in Europe to be made of silver and was released in 1997. After the immense popularity of its forerunners, such as the silver Maple Leaf and the Silver American Eagle, the production of a British coin seemed like a natural decision to follow in their footsteps. In the beginning, the silver content of the Britannia coins was just 0.958 percent pure, but in 2013, it was raised to 0.9999 percent, making them much more valuable. In 1987, sculptor Philip Nathan worked on the first iteration of the initial design for the gold Britannia. The Silver Britannia coin, which does not incur any Capital Gains Tax in the United Kingdom, will be celebrating its 20th anniversary in 2017. We are a Royal Mint authorized distributor here at our company.

The Royal Mint’s Britannia series has been updated to include the Platinum Britannia as its most recent coin release. The collection was first shown to the public in 1987, making it 31 years old when investors were first allowed to purchase a platinum coin from within this series. The effigy of Queen Elizabeth II that is shown on the 2022 Platinum Britannia is the most recent one to be created, and it displays the same level of detail as the designs used on the gold and silver pieces (Platinum Britannia, 2022).