When it comes to investing – you will often hear someone talk about how they are up big or down big when it comes to their investment portfolio.  However, what they are usually referring to is either an unrealized loss or an unrealized gain, as when a portfolio is up or down, without selling anything from that portfolio, technically, no loss or gain has occurred.  That is what is meant by an unrealized gain or loss.  For example, if you were to buy a stock at $10 per share and you bought $500 worth, then that stock goes to $5, you now have an unrealized loss of $250.  It is considered unrealized because if you haven’t sold, it could quickly become an unrealized gain if the stock were to go to $15.  Losses and gains are only realized upon selling the actual asset and cashing out.

That being said, when looking at global financial markets – large banks including central banks have began reporting that they have accrued MASSIVE unrealized losses through 2022 due to financial contagion spreading across the world.  First, it was reported that due to mortgage rates skyrocketing the four largest banks in the U.S. aside from the Federal Reserve have over $17 billion in unrealized losses currently on their balance sheets.  What is interesting though, is that most of these unrealized losses are coming from an asset call mortgage-backed securities (MBS), however, these MBS can be moved into a portfolio within the bank called a held-to-maturity-portfolio which removes these securities for sale by the bank.  Due to the current financial policies in place, this allows for banks to write-off potential losses and in turn boosts their available capital, as well as cutting down their total unrealized losses.  To add some colour to the situation, at the start of the pandemic banks held $495 billion in their held-to-maturity-portfolio.  Today that number has surged to $802 billion emphasizing just how desperate these banks are for liquidity.  The surge in inflation is also forcing banks to hold more assets in reserve hindering how much available capital they have at their disposal. 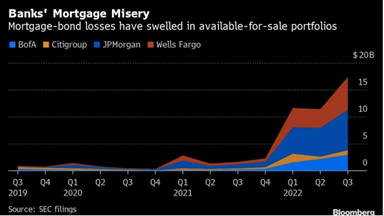 Other major announcements of unrealized and realized losses came out of Switzerland and Canada this month.  Credit Suisse, who is just behind UBS as the largest Swiss banking institution, has come out and reported that they project to lose upwards of $1.6 billion in the 4th quarter that spans from October to December.  From there, it was the Bank of Canada that announced that it suffered a realized loss of $522 million in the 3rd quarter – its FIRST LOSS in 87 years since conception.  The bank also noted that it was looking to the Federal Government to help balance its books, and when it comes to the Federal Government, their only solution is to advise the money printers be turned on to create the liquidity needed.  Of course, this will only make the inflationary pressures on the economy worse.

So where do silver and gold come into play?

Well, recently the President of the European Central Bank, Christine Lagarde, was asked how silver and gold would be merged with Distributed Ledger Technology that is gaining large popularity through the crypto market.  Her answer has peaked the interest of many within the silver and gold industry that caught exactly what she had said.  She starts off by saying that using silver and gold to execute real-time cross-border payments has not been explored at this point, but she goes on to mention the current flexible exchange rate that silver and gold have due to not being linked to any currency directly, and the reason why central banks, namely the IMF, prefer it that way.  She continues on by saying that a fixed exchange rate for gold and silver is undesirable because it “limits the shock absorbing capacity of the financial system.”  Think about what she just said.  Silver and gold are the only assets in history that have precedence of being revalued overnight.  This happening in 1933 in the United States when the government seized all public gold and then revalued gold from $20 per ounce to $35 per ounce with the stroke of a pen; significantly increasing government wealth by doing so.  Having silver and gold at a floating exchange rate that can be revalued to cover debts is exactly the scenario playing out before our eyes.  Central banks have been buying gold at a pace unseen since 1967 when the USD was backed by gold AND Christine Lagarde has now confirmed that they (central bankers) view silver and gold NOT as an ancient relic as Ben Bernanke once claimed, but as a financial shock absorbers when times get rough.  With that said, the only logical way to cover their mounting unrealized losses is to hold enough silver and gold to cover their debts plus some when precious metals are revalued.

The same can be said for individuals that have realized the importance of acting as their own bank and being in full control of their own financial assets.  Holding physical silver and gold immediately add a layer of protection that even the Bank of Canada does not have.  If and when silver and gold see a revaluation to cover world debts, the Bank of Canada holds ZERO metals in reserve, and therefore, the Canadian Dollar will see no such relief when that time comes; its value will plummet faster than it already is.

If you want to secure real wealth in your own possession and take part in the revaluation, here at Au Bullion, we recently released an exclusive 1oz Real Wealth Silver Grizzly Round that holds lower premiums than coins out of sovereign mints allowing for the public to get more physical silver for each of their dollars. 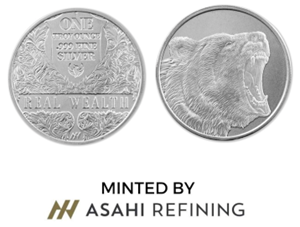